The yellow rabbit picked his front teeth with a twig and contemplated what it would be like baked in a rabbit pie. He remembered a tune the tone-deaf gardener used to sing “Run rabbit, run rabbit, run, run, run, something, something, he’ll get by without his rabbit pie…” Stupid song but with a happy ending for the bunny. The yellow rabbit didn’t have to worry about ending up in a pie because he crept among the marrows and hid in the sunflower patch or in buttery dandelion clumps and the gardener couldn’t see him. There were so many things to hide in, or on, or against when you were yellow. He remembered the nerve-wracking time he stopped on a double yellow line so a council truck wouldn’t run over him. The driver wasn’t going fast but that’s beside the point. The yellow rabbit nearly hopped out in front of the vehicle. Of course, stopping still on the yellow line made him invisible. His paws were a bit shaky once the truck had driven passed and he’d vowed then and there never to cross a road again. He looked up at the back verandah of the old homestead and continued his contemplation. There was a big yellow tablecloth fluttering on the railing which meant plans were afoot to eat outside. He had already spied the plump yellow cushions on the cane chairs. The big glass jug was frosting over, filled with ice and lemon nectar.

The yellow rabbit always thought it strange how the humans ate with tools. They doled out piles of food and delicious salads with forks and scoops and ladles. Then they sliced succulent pineapples with large knives and chopped it into chunks. The strangest thing he’d ever seen was when they would cut the sides off mangoes and grid the luscious inner flesh before turning the skin inside out. At least the young human consumed large portions of her meals with her fingers. This meant that the female of the warren would continually wipe the fingers and face of the little fluffle. The yellow rabbit was now watching for this small fluffle, a young girl who always wore a yellow and white striped dress. She strolled outside holding a glass bowl, spooning egg custard into her mouth without watching the spillage. Her bright eyes were scanning for him. It didn’t take long for her to see him crouched down in a tray full of marigold seedlings. He twitched his long ears. She brushed a curl out of her eyes. He wiggled his nose. She gave a wiggle of her fingers then turned away, disappearing back inside.  Out came the male and hung a wire cage on a fancy hook. The canary inside the cage started singing. The male started to set the table with yellow spotted plates and serviettes with sunbeams on them but seemed more interested in taking long swigs from a bottle of amber liquid he had left on the open window sill. The little girl reappeared and behind her trailed several yellow balloons on long shiny strings. She was wearing a cardboard hat decorated with sprigs of wattle which tangled in her blonde hair. The female emerged from the kitchen door with a bunch of daffodils in one hand and an empty honey jar in the other. She put the flowers in the jar and placed it in the middle of the table while talking to the male. 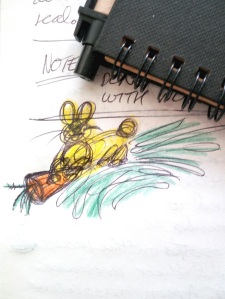 The yellow rabbit shuddered and averted his eyes from the hot metal plate where the male had just thrown raw meat. Even the smell of fresh lettuce couldn’t stop him feeling slightly nauseated. After a few minutes, the little girl looped the balloon strings around the handrail and skipped down the verandah steps. She was coming straight towards him. Instinctively he shrunk low into the cool earth and tensed his muscles. She was swinging her arms casually and appeared to be looking over his head at a light catcher made from shimmering pieces of tinfoil clipped to a branch. The yellow rabbit blinked in surprise. She walked right by. However, quick as a wink, she flipped something out of her pocket and into the seedling tray. It was a carrot! Joy swelled in the yellow rabbit’s heart. He snatched up the fresh carrot in his big front teeth and leapt out of the seedling tray. He landed on the grass and bounded for the back fence. He knew it was ungracious of him, but he didn’t turn around to acknowledge the young girl. Biting hard on the carrot, and with a bit of pulling and tugging, he managed to crawl under the fence without getting stuck. He hopped off across the paddock with his tasty prize. The young girl trailed slowly back to her parents. They had soft smiles on their faces. With a happy nod, the young girl sat down at the table where a chunk of pineapple was waiting. As the sticky juice ran down her hands, she listened to her parents tell the familiar story of how they had been shown the nearby rabbit colony when they were her age. The yellow rabbits were a family tradition but nobody knew why they were yellow. Strangely, most of the bits and pieces in the homestead were the same colour, a shade her grandmother called sunshine. Legend says the yellow rabbit always appears on bright sunny days.

The above story was written as a free-write, a freefall stream of consciousness, and I had no idea where it was going or how it would end.  It’s a fun technique!  To find out more, click  Jen Storer Girl and Duck Scribbles