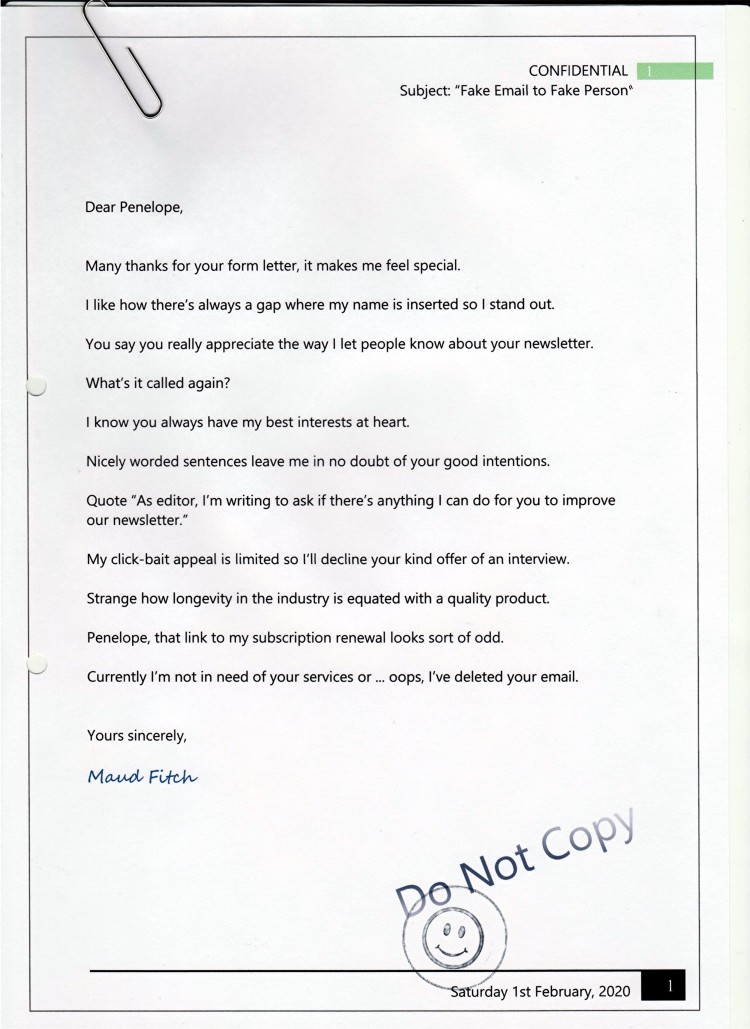 With thanks to Maud Fitch for her permission to post.
♥ Gretchen Bernet-Ward

In November I attended two important events for any emerging writer – publishing and bookselling.  There is a bonus short story at the end of my report.

The first event I attended was “Pathways to Publishing” at Brisbane Square Library CBD hosted by Kylie Kaden, Carolyn Martinez and David Bobis.  Dr Kate Steele was unable to attend but there was much advice to hear and many questions to ask.  No trade secrets here.  The photos (below) show the tilted windows behind the speakers platform but not a clear view of the Victoria Bridge and the ferries going up and down the Brisbane River.

Kylie Kaden is an internationally published author of women’s fiction, Carolyn Martinez is the Director of Hawkeye Publishing and David Bobis writes fiction short stories for newspapers and magazines.  Pantera Press and Alison Green were mentioned and I made a note that editor Lauren Daniels of Brisbane Writers Workshop is an exponent of “show not tell” method.

One hour flew by.  However, I’m too lazy to embrace the promotional rigors of self-publishing.  I did learn that persistence pays off.  Flipside: if you are traditionally published your publisher takes the weight off but the finished product is up to them, cover design and all.  Meanwhile I must try to write a completed manuscript.

Got a load of newly minted books in boxes in your hallway?
Congrats, next comes The Bookselling

The second event I attended was GenreCon Night Market held at State Library of Queensland, South Bank.  The whole event ran for three days but I was there on Friday evening in my brand-new capacity as Secretary for Society of Women Writers Qld Inc sharing a table with two authors Toni Risson and Mocco Wollert.  Further down the room were Australian Authors, FAWQ, Virginia Miranda, Russell Perry and Indrani Ganguly.  We were surrounded by authors of every genre hoping to sell their nicely displayed wares.  Yes, cash and I were soon parted.

State Library has many rooms but this room is stunning with a mirrored ceiling and one end open to the balmy night breeze.  The permanent wall display cases are crowded with valuable antique tea cups and saucers. 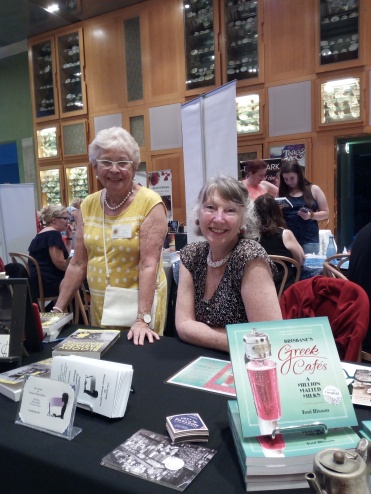 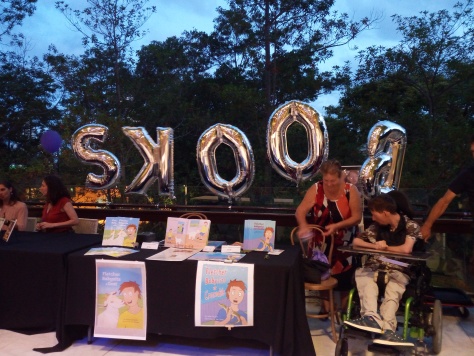 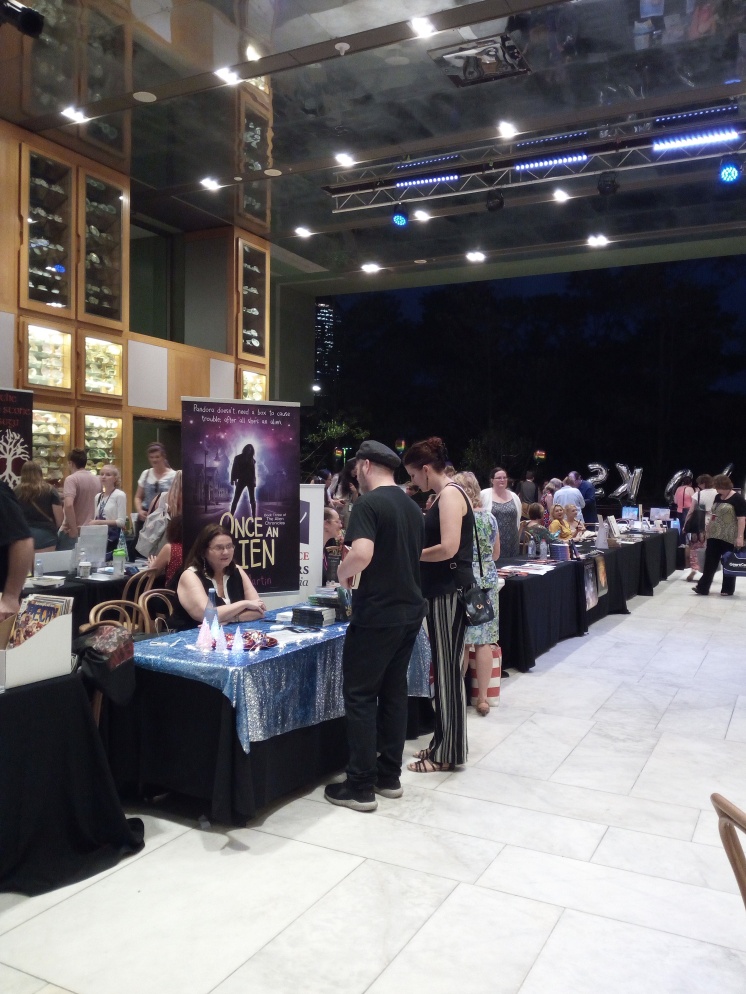 The venue filled up and was buzzing from 5pm-9pm but unfortunately nobody knew there was a Meet & Greet in another section with food and wine, so by the end of the night we were famished.

Early on, a cup of hot coffee had spilled across our table.  It soaked a lovely tablecloth which had to be discreetly removed.  I scored a beverage-damaged book which I shall enjoy reading even if the aroma of caffeine tingles my tastebuds.

No book sales for our table but it was a night of lively conversation and I handed out several SWWQ membership leaflets.

Being an exponent of public transport on both occasions I travelled to and from the venues in council buses.  Waiting at a city bus stop on a Friday night can be an interesting experience.

I saw the drunk staggering along the pavement and I hoped he and his wildly waving bottle of spirits would keep going.  No, he lurched to a stop in front of me.  To attract my attention, he bellowed “Hey, hey darlin” and leaned forward.  His voice dropped.  “I jus wanna say that’s a lovely dress ya wearin.”  He let out a cackle and stumbled away, only to stop again.  I refused eye contact but I knew he was looking back at me.  He shouted in triumph “Bet ya didn’t expect that!”  I gave a tiny smile then jumped up and practically ran to my bus.

Guess what?  The bus driver was new, took a wrong turn and actually got his whole busload of passengers lost!  I didn’t notice until I looked up and had not the foggiest idea where we were.  Neither did the bus driver.  The bus meandered through the night while we muttered to each other.  Thankfully a school teacher-type woman gave him directions on how to get back on route.  Good old human navigation.

I’ve no complaints because it was an almost magical Harry Potter experience being somewhere unrecognisable, going down steep streets, swerving around wide corners, passing twinkling cafes and glittering nightclubs.  The woman who got us back on track left the bus before me.  Eventually I arrived at my stop, none the worse for an unscheduled detour.  As I alighted I experienced a twinge of regret for not raising my voice and saying “Thank you” to the woman for her calm control of the situation. 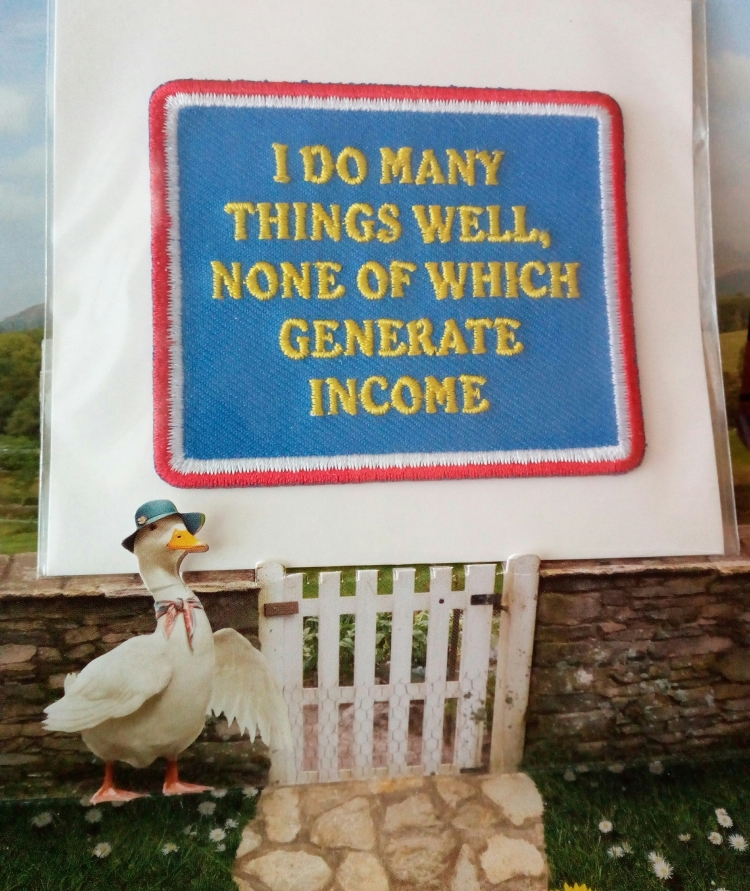 Traditional work-life balance means separate compartments in our lives, but lines can become blurred, pressure can build and conflicts emerge.  Instead of working against each other, integration means all parts can work together to achieve a positive outcome for our lifestyle expectations.  Then realisation that your work-life balance is “out of kilter” will no longer apply.  I wish I had read this book before my divorce!

John Drury is a presenter, trainer, facilitator, and author of new book “Integrate” which challenges busy people to rethink their approach to life and work.  “The demands of work have never been greater.  A balancing act is not the answer.  Work-life integration is the only way forward in a 24/7 world” says Drury, whose painful personal experience with burnout, and subsequent recovery while in a senior leadership role, motivated him to start helping other high achievers create and maintain a realistic lifestyle.

In his book, Drury outlines a way to align all the parts of your life so they work in unison.  He says “This takes effort, but it’s well worth it and the end result will give you a schedule far easier to work with than just a big juggling act which no-one ever seems to make work.”  He believes that you must look after yourself at your very core; respect your health, your wellness, your relationships and your work commitments.

In John Burfitt’s interview, Drury explains that self-care and implementing achievable self-management strategies are essential.  Drury goes on to say that once important areas are defined and outlined, it becomes a matter of making decisions and planning goals “And you must do that, as a goal without a plan is just a wish.”

Real life book shop owner Shaun Bythell tells of the humorous, exasperating and often crazy experiences he encounters working in The Book Shop, the largest second-hand bookshop in Scotland.  Also, The Book Shop is situated in Wigtown, known as Scotland’s ‘National Book Town’.  Bythell writes a compelling and amusing account of his daily life, from eccentric local characters to a decline in traditional ways of life where diversity is not always good news for rural farmers or booksellers.  A good book for booklovers or would-be book dealers.  Think I’ll stick to reading!

Read a full review by George Delaney:
Readings Review of ‘The Diary of a Bookseller’

Excerpt from The Diary of a Bookseller: 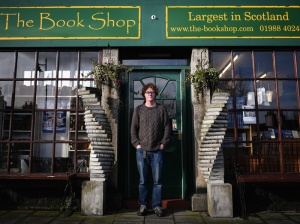 “For a few years I have given over the formal drawing room above the shop to an art class for one afternoon a week. It is taught by local artist Davy Brown and takes place every Tuesday. A dozen or so retired ladies make up the group. At this time of year the house is bitterly cold, so I left Norrie instructions to light the fire and put the space heater on for an hour before they were due to arrive, but he forgot. One of them almost needed to be resuscitated. I would happily let them use the space for free, but they kindly pay me enough to cover the heating costs and a bit more beside.”

Between jobs, I once had the misfortune of attending two group interviews.  Both for a permanent part-time position.  Let me tell you about the first one.  I was pleased to be called in and keen to get the ball rolling until after an hour I realised the whole process was degenerating into tedious insincerity.

Fellow jobseekers and I played mind games with shapes and symbols, wrote clues on butcher’s paper and on each other’s backs (with our finger) and sat down to interview the ‘buddy’ seated next to us.  We then introduced each other to the selection panel which was a trick because what was told to us privately was then asked to be broadcast across the room.  And, most outlandish of all, we formed groups to invent a new company motto and present it.  Then we were gathered into teams to construct a workable bridge from scrap pieces.  During discussion time, one person endeavoured to take control of our group, effectively making it a one-woman show.  Another broke away from his group to talk to me separately so I’m sure that would have been a black mark against him.

Most applicants ‘talked the talk’ although whether they actually meant it or not remains to be seen.  The extroverts did their best to outshine the other applicants with their superior customer service line but when pressed, many hadn’t even checked the company website.  Basically everyone was mouthing the same tired old phrases about equality, fairness, safety, courtesy, teamwork and how good they would perform in the job.  Lines which they had obviously rehearsed at home.  Which in itself is good but it wears everyone down, especially when juniors kept referring to their notes.

I tried to pull my thoughts together and keep a glazed look out of my eyes but regrettably enthusiasm had started to wane.  It appeared to me that the HR department was trying to justify its own position within the company by orchestrating an overly long interview process and my respect for its staffers dwindled during that period.  It was held at an awkward time of day too, so I left the interview feeling hungry which did not help my mood.  For those nervous yet bored candidates waiting to be called, surely a beverage wouldn’t have been too much to ask?  At the end of this interview process, we were instructed to leave by the side door.  I hoped the other applicants were more upbeat than me, or at least better actors.

Another point which I found interesting was the amount of young first-job attendees who wore jeans and casual tops.  In a job where presentation is important, I failed to understand their choice of clothing.  Especially considering there were 75 applicants, hand-picked from hundreds, for only 25 job vacancies.  Apart from a good resumé, I think your eagerness to get a job should include upping your appearance.

A considerable length of time, and another job, has passed since then and I still have not been informed of the outcome.  I seriously question the usefulness of such a long drawn-out exercise.  ‘You either got it or you aint’ and I think a good personnel department should see that a mile off without all the frills.

The Personal System/2 was IBM’s third generation personal computer released over 30 years ago on April 1987.  Recognise the actors advertising the product?

The cast of the long-running TV series M*A*S*H set during the Korean war and, if you are old enough, you can surely name their characters.

Larry Gelbart was the man responsible for developing M*A*S*H for television from the 1970 feature film M*A*S*H which was adapted from Richard Hooker’s 1968 novel “MASH: About Three Army Doctors”.