The plot twists and turns over many months as I follow the lives of three families jolted sideways after two untimely deaths.

Michael’s friend Janey has lost her dad to cancer and Michael understands this, but the other person who died?  Nextdoor neighbour and dear friend Irma.  Was it a heart condition, an accident or murder?

The safe, cosy world of young Michael and his Nan changes dramatically.  Michael also has to cope with George, a bully, who moves into Irma’s house with his father Shawn prior to her death.

The sudden loss of Irma is deeply felt by Michael.  As the saying goes he has “an old head on young shoulders” but is confused over what actually happened and gets no real help from the adults.  Advice is conflicting.

Deep down Michael believes Irma was murdered and is determined to convince Nan and the gatekeepers.  There are complexities to face and he over-reaches in the hope of finding justice.  Anxiety joins his grief, he challenges his homelife and raises old questions.  Why does he live with his grandmother?  Where are his parents?

During a bad night, Michael’s old teddy bear comes down off the shelf for support as he works on his theory of Irma’s demise.  He thinks she may have been poisoned.  The chicken soup in question was homemade by Irma and well loved by Michael, his favourite panacea for cold symptoms.

At one stage, Michael suspects his Nan – she’s my favourite character! – and while out walking he dashes away and hides.  Quote “Michael?” calls Nan.  I don’t move.  “Michael”.  “He’s fallen in the bloody moat,” says the man who isn’t Grandad.  “Good job there’s no water in it.”  “Feeder canal,” says Nan.  “This is no time to be right about everything,” he growls.  I’ve never heard anyone tell Nan off like that before. Unquote.

Author Maria Donovan portrays well-rounded, believable characters and each brings small yet highly significant details to the story.  Bully and his father are thorns in Michael’s side but nothing distracts him from the hunt for clues.  Janey has her own family problems.  To relieve her frustration she gets a box of golf balls and stands in The Middle, a green opposite the houses…

Being of a nosey disposition myself, I empathise with Michael’s underlying emotions and the need for resolution.  Tension escalates and stoic Nan marches towards a showdown.  Maria Donovan’s tightly written finale comes at a penultimate time of year for everyone.

Skillfully woven through the story are school holidays, the seaside, and events on telly like Wimbledon.  Occasionally the zeitgeist side-tracks Michael’s quest yet adds a kaleidoscope of nostalgia for me.

Michael’s journey isn’t for children although young adult readers would identify with the youthful side.  Part mystery, part coming-of-age, I think adults will enjoy the unique elements of the plot, and appreciate less gore than currently found in mystery novels.

Maria Donovan’s book walks a fine line between innocence and adult behaviour and succeeds in capturing the mood beautifully.  It demands to be read again.  Seek out those clever clues!

‘The Chicken Soup Murder’ is Maria Donovan’s debut novel and was a finalist for the Dundee International Book Prize.  Apart from this book, Maria has many literary credits to her name including her flash fiction story ‘Chess’ which won the Dorset Award in the Bridport Prize 2015.

Maria is a native of Dorset UK and has strong connections with Wales (also in the book) and Holland.  Her past careers include training as a nurse in the Netherlands, busking with music and fire around Europe and nine years lecturing in Creative Writing at the University of Glamorgan, South Wales.

I can highly recommend the informative Chicken Soup Murder Q&A with Maria Donovan and Shauna Gilligan.

I was waiting for the delivery of a book written by UK author Maria Donovan.  The title and synopsis of ‘The Chicken Soup Murder’ hint at a delicious yet deadly coming-of-age mystery.

There was scratching at the front door and our well-trained pet dragon stood there with a grin on his face.  He had collected the parcel from the letterbox in anticipation of a treat.  I patted him on the head and said ‘Good boy’ then picked up the parcel.  He whined.  I laughed.  ‘Okay, I’ll get a couple of nuts’.

Inside the door, I placed the parcel on the sideboard.  Underneath was an old rusty toolkit containing old rusty bits and pieces.  I selected a couple of flange nuts and one bolt, gave them a squirt with WD40, and went back outside.

Part of the game was a quick toss-and-gulp and if you weren’t ready you’d miss it.  I closed the front door on the slobbering noises and went to find a pair of scissors.  The Booktopia cardboard was tough but I wrested it open. 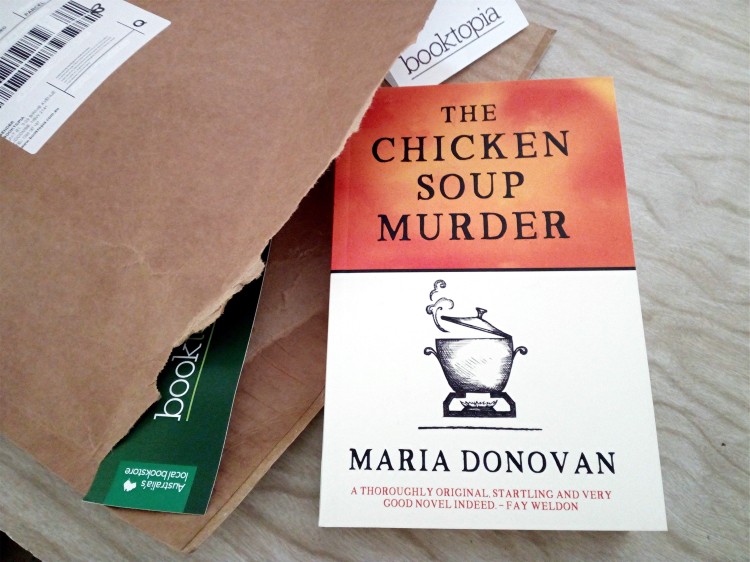 And there was the pristine book I had so eagerly awaited!  At the moment, I’ve only read up to Page 20 so I am sorry to disappoint you but my book review will be in another blog post further down the track.  As my auntie used to say ‘Keep you in suspenders.’