Do you ever throw a literary stink bomb into your book club meetings?  Does a particular book annoy you into spewing a non-positive review?

My recent attendance at a book club gathering certainly raised eyebrows (I guess I’m not highbrow) when I panned Julian Barnes 2016 quasi-biography ‘The Noise of Time’ based on Russian composer Dmitri Shostakovich.

I believe book clubs should read a wide variety of books and not just ‘literary stuff’.  Out of 12 people, only two of us spoke up and voiced our critical opinions without fear or favour.

Book Review – ‘The Noise of Time’ by Julian Barnes

Author Julian Barnes fictionalised biography of Russian composer Dmitri Shostakovich begins in 1930s and is about the man himself, not necessarily about his music which is a disappointment.

Barnes wants to immerse us in the inner world of Shostakovich, therefore most of the story takes place within the previously uncharted waters of the composer’s own mind.  The rest appears to be gleaned from conventional sources.  There’s a lot of telling and not much showing. 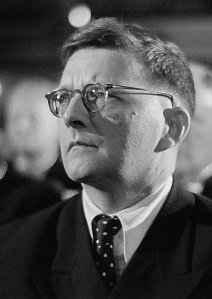 First up, Shostakovich’s opera ‘Lady Macbeth of Mtsensk’ is denounced, and while there is tension and foreboding throughout the story, there’s no significantly dramatic scenes after this point.  Shostakovich smokes heavily and is understandably nervous.  He has the fear of Soviet Communism hanging over his head all the time (there’s a peculiar phone call from Stalin) and the dread which Shostakovich seems to pile upon himself.  Like the bookcover illustration, he’s a man always looking over his shoulder but this doesn’t necessarily make edifying reading.

Politics aside, Shostakovich later wrote his Fifth and Eighth Symphonies yet Barnes glosses over a lot of this, using a series of vignettes without delving into that emotional side, so there’s minimal mention of his creative process or the effects of his wife’s death on his family.

The interior dialogue does not expose Shostakovich as an eccentric creative, nor do I think it makes him a likeable protagonist.  Barnes portrays his inner world in an obsessive manner (think clocks, bad luck in a leap year, the elevator scene) and I think he comes across as a bullied child.  One who needs encouragement yet gets slapped down at every turn.

My favourite paragraph is when Shostakovich is staying in New York and a woman working at the Soviet consulate jumps out of a window and seeks political asylum.  So, every day a man parades up and down outside the Waldorf Astoria with a placard reading “Shostakovich Jump Thru The Window!” but according to Barnes and other writers this gave him great inward shame.

In strides man-about-town composer Nicolas Nabokov who kindles Shostakovich’s shame so that Shostakovich is trapped by his own timidity, unable or unwilling to stand up and be counted, preferring to talk through the medium of music which is later used to punish him.

For me, this partly true reimagining is not very engaging.  I did learn a couple of new things but even allowing for Julian Barnes writing style, this book doesn’t add anything special to my reading list.