The 25th Scarlet Stiletto Awards have been launched – with a body or two in the library – and I have reblogged the exciting news:

The event included dramatic readings of three winning “body in the library” stories – “Jane” by Narrelle M Harris (read by Jane Clifton), “Caught on Camera” by Jenny Spence (read by Susanna Lobez) and “Brought to Book” by Kath Harper (read by Leigh Redhead).

Dr Savage (below), the 2011 shoe winner and now Director of Writers’ Victoria, declared the awards “a milestone for Australian crime – at least of the literary persuasion”. 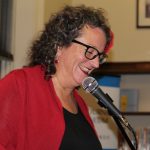 The awards, she said, had “spring-boarded the careers of many writers, including myself. To date, 3084 stories have been entered with 23 Scarlet Stiletto Award winners –including category winners – going on to have novels published.

“Like many of Sisters in Crime’s best ideas, it sprang from a well-lubricated meeting in St Kilda when the convenors debated how they could unearth the female criminal talent they were convinced was lurking everywhere.

“Once a competition was settled on, it didn’t take long to settle on a name – the scarlet stiletto, a feminist play on the traditions of the genre. The stiletto is both a weapon and a shoe worn by women. And of course, the colour scarlet has a special association for us as women. And they were right – talent is lurking everywhere, sometimes in the most unlikely places!”

The success and longevity of the Awards have been hugely dependent on the generosity of Australian publishers, booksellers, the film and television industry, authors and other parties.

Sisters in Crime had been uncertain that the launch would go ahead because, at the eleventh hour, the First Prize Sponsor, Bonnier/Echo Publishing, was closed down by its overseas arm. Luckily, Swinburne University and the ever-resourceful Dr Carolyn Beasley, Acting Chair of the Department of Media and Communication, stepped into the breach.

Sisters in Crime spokesperson, Carmel Shute, said, “We were also lacking a Young Writer Award sponsor because Allen & Unwin pulled out last year after more than 20 years of sponsorship. We were chuffed to get support at the last minute from Fleurieu Consult run by South Australian member Jessie Byrne, who is researching her creative PhD exegesis on Sisters in Crime Davitt Awards for best books.”

There are two brand-new awards on offer this year: Writers Victoria Crime and Punishment Award ($660) for the story with the most satisfying retribution (the winner gets a three-month spell in prison in the guise of a studio residency at Old Melbourne Gaol) and the International Association of Forensic Linguistics (IALF) Award for Best Forensic Linguistics Story ($1000). 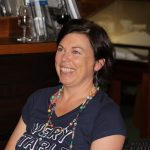 IALF President, Dr Georgina Heydon (left) from RMIT, told the crowd that the award was designed to foster understanding of forensic linguistics which uses a scientific approach to language analysis in legal and criminal investigations.

“Typically, a forensic linguist is engaged to analyse the authorship of an anonymous document, to determine what was said and by whom in a covert recording, to identify coercive or oppressive questioning by police, or to determine the need for an interpreter. It’s not to be confused with the analysis of hand-writing styles.”

Closing date for the awards is 31 August 2018. Entry fee is $20 (Sisters in Crime members) or $25 (others). Maximum length is 5000 words. The awards will be presented at a ceremony in Melbourne in late November.

Visit the Sisters in Crime website and sign up for their newsletter.
It would be criminal to miss out on this great opportunity!